The entire time we were on the “Sites of Conscience” tour I felt as if I were treading on holy, sacred ground. The rocks and trees, the river and soil all bore witness to the torture, pain and trauma of our African American brothers and sisters. As I visited each memorial, I began to be aware of the privileges I have as a white woman, evidenced by my ignorance about the true nature of the history of slavery and how the impact of that trauma lives on today. I never thought to question the narrative that was fed to me in school and in our middle-class white community.

​I realize what happened in Alabama, across the south and in parts of the midwest has never been accurately represented in school curriculums. One of the displays in the Legacy Museum gives counties and families an opportunity to gather soil from the sites where lynchings occurred and then label jars with the name, date and place. They then have the opportunity  to erect a memorial at the actual site. While looking at the display, I was drawn to a place on the shelf that is missing representation; Grant County, Indiana. Grant County is one hour (practically in the backyard) of Butler’s campus. I felt ashamed to live in a state that has not participated. I decided to find out what happened in Grant County. The above description of  the Turner family, Mary, Hayes, and their unborn child,our tours of the National Center for Peace and Justice and The Legacy Museum in Montgomery, are the inspiration for this poem.
​
Marla L. Berggoetz

I am not meant for harm,
you desecrate my purpose.

I give life and breathe to sustain.
I am nourished by rain,
not the blood of my brothers,
or the tears of our mothers--
no.
Somebody— do something
anyone, anything— just
stop it.

You watch.
You do-
nothing.
I see you,
I know your face
and your name.
I will not forget.
I will tend to their
wounds with my flora.
I will carry their
souls to the sky.
Cut me down,
cover me over;
still my roots remain.
The
roots
will
remember.
MLB 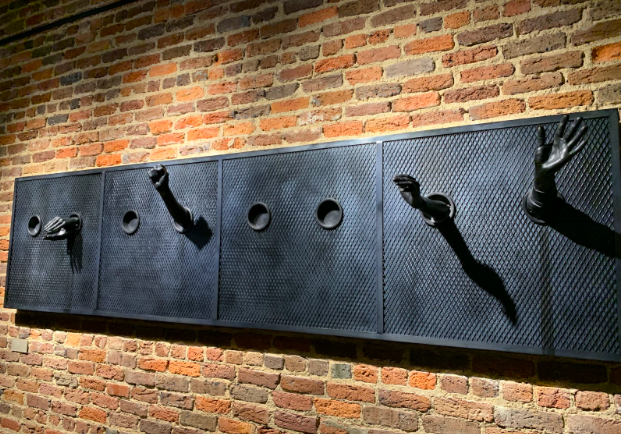 This is an art piece from the Legacy Museum in Montgomery. The museum showed how slavery has not been eradicated, it has only evolved. This is demonstrated in the criminal justice system and school to prison pipeline. I interpreted this art piece to be a visual representation of modern slavery as it shows people behind a fence and enclosed. The hands are reaching out for the freedom that was taken from them.
Butler University, Reilly Simmons '20

The Other
​
Wherever the white man goes, the pain follows.
He creates binaries and put us in boxes.
Fear arises from the chaos that a white man brings to the world.
He says that my brown friend is dirty. He tells me that my black friend is stupid.
He steals indigenous lands while claiming that he was the first.
How can murder be civilizing?
He puts limits on my body and builds rules that are made to trap me..
The white man enters spaces that are not his to enter.
He inserts himself into the lives of other humans.
He does not accept a no for an answer.
It turns all the Others, besides the white man, into something threatening 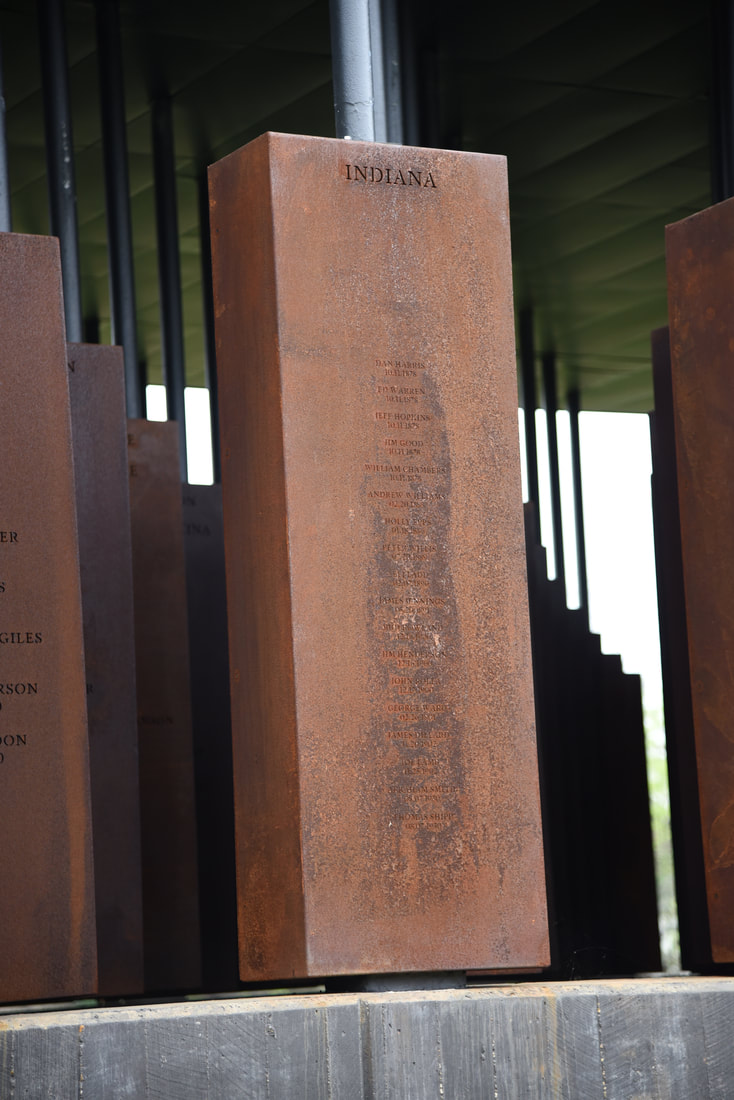 "There is often a cruel irony involved with memorializing tragedy, in that memory is a very divisive subject. Something that is supposed to symbolize healing and community becomes the center of argument, whether over its very existence or the details of its design or both. Who or what should we remember, and why are we remembering them? Who gets to decide what is highlighted and what is left behind? Most importantly, how can we recall tragedy without glorifying it? These and many other questions have all been tackled, with varying degrees of success, by the creators of memorial museums and monuments, including the Holocaust Museum and the Vietnam War Memorial in Washington, D.C. […] and the many Civil Rights Movement museums and memorials in Selma and Montgomery.


Any memorial is, by definition, fraught with tragic history, and this makes it difficult for its creators to appease all interests in a given situation. […] While memorials can increase visibility and knowledge about an event or person and even evoke powerful reactions from visitors, it should not be their goal to heal entire populations of their past afflictions, especially when their existence is so often born of conflict. […] It is often problematic to refer to monuments as “healing”—in the long run, what can strategically placed building materials really do for the communities they represent, especially in the context of political divides? Instead, memorials should be seen as catalysts for peace, taking an initiative to start a conversation.”
- Corinne Ebner ‘21